You are on the vacation of a lifetime! You have planned and saved money for this moment for months. Then, the unthinkable happens. Travellers’ Diarrhea!

Nothing puts a dampener on travel experiences like stomach cramps and diarrhea. The good news is you can reduce the risk of Travellers’ Diarrhea with Travelan® – an over the counter supplement available in pharmacies across Canada including Shoppers Drug Mart, Loblaws, Jean Coutu & online at Amazon.

Travelan® neutralizes Travellers’ Diarrhea  causing pathogenic bacteria, rather than having to treat the symptoms after the condition has begun.  According to the Public Health Agency of Canada1, Travellers’ Diarrhea is the most common illness that affects travellers. It is easily spread from person to person or by eating food or drinking water contaminated with feces.  The most common cause of travellers’ diarrhea is the nasty form of E.coli, known as Enterotoxigenic Escherichia coli (ETEC). ETEC can be found in a street-side stall or in the best restaurants.

When you take one or two caplets of Travelan® before a meal, it lays in wait in the gastrointestinal tract. If you consume food or drinks that are contaminated with ETEC, Travelan® is designed to bind to the bacteria, neutralizing them and inhibiting their attachment to the intestinal wall.

Travelan®’s active ingredient is bovine colostrum enriched with anti-E.coli antibodies. These antibodies work to target and neutralise bacteria before they can make you sick and rob you of your precious travel time, setting Travelan® apart from other colostrum supplements.

Take Travelan® as directed on the pack. 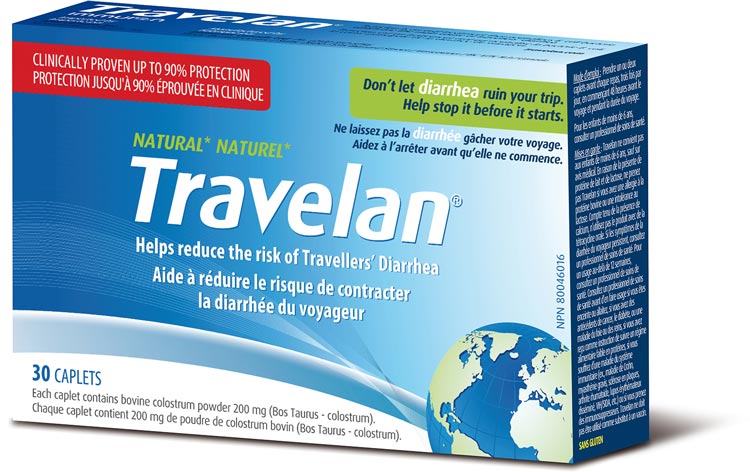 Travelan®’s active ingredient is bovine colostrum enriched with anti-E.coli antibodies – these special antibodies are what sets it apart from other colostrum supplements. 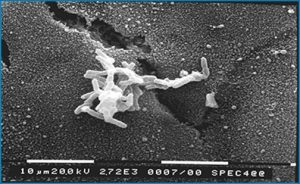 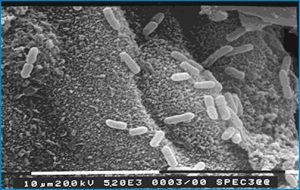 Travelan® has been shown in clinical trials to significantly decrease the risk of travellers’ diarrhea. Travelan® underwent Controlled Human Infection Model (CHIM) studies which were, double-blind, placebo-controlled medical trials in Europe and the USA. The trials showed up to 90% protection against infection with E.coli (ETEC), the major cause of travellers’ diarrhea2.

In addition recent studies by the US Department of Defense show that Travelan® is cross-reactive to Campylobacter, Enterotoxigenic E.coli and Shigella – all potential causes of Travellers’ Diarrhea.

“I would never discourage being adventurous with your food when travelling – after all, food is culture. Popping a packet of Travelan in your bag means you can try new foods with more peace of mind.”

“Any country with lower health standards than your home country would be a good destination for the use of Travelan, however Traveler’s Diarrhea can happen at any time so practice caution and use Travelan.”

“Travelan is something I’ll definitely be packing next time I jet overseas to somewhere that has a high risk of contracting Bali belly.”

“I cannot recommend Travelan enough! It is my favorite travel product by far. I love to eat the local cuisine when traveling and taking Travelan allows me to eat adventurously and enjoy my trip to the fullest. It is my (not-so) secret weapon against fending off traveler’s diarrhea and I refuse to travel without it!”

How to maintain tummy health on your next trip?

Montezuma’s revenge, Bali Belly, whatever you like to call it, happens to the best of us – seasoned Travelers are no exception. Travel blogger extraordinaire The Blonde Abroad shares her tips for keeping your digestive system in check, leaving you to indulge fully in your travel experiences.

What to do when you get sick while traveling?

Be My Travel Muse

There’s nothing really worse than finding yourself sick while on the road, and the truth is most people would be a little hesitate to talk about stomach and digestion issues, but here we are. So due to an abundance of first-hand experiences, this is what I’ve learnt about getting sick on the road and what to do about it

Tips to avoid getting sick in Southeast Asia

We all heard of the dreaded Bali belly but there are quite a few other common illnesses that risk ruining your Southeast Asia vacation. Here are some of the top sicknesses that you can contract while traveling in Southeast Asia and how you can avoid them.

How I look after my gut while traveling

There are a few key moments that will stay with us from our travels and adventures around the world, most are pleasant memories we’ll cherish, until it’s poo related. Liz from Young Adventuress shares with us her not so pleasant gut-related experiences and her top tips on how she looks after her gut while traveling.

How to Avoid Getting Sick on the Road?

There’s nothing worse than being sick while you’re travelling, especially in a developing country. If you’re wondering how to avoid getting sick while on the road, this post will explain everything you need to know about traveller’s diarrhoea, how to avoid it, and why Travelan should be in your packing list.

How to Avoid Getting Sick in Mexico, Thailand , India & More (While Still Eating Adventurously)

Wherever you are or may be visiting in the world, as a seasoned traveler myself, (and seasoned travel sickness-er) I’m here to share my best tips for preventing food and water-born illness abroad, while still eating (almost) everything in sight.

Bali with kids - How to avoid Bali Belly?

Rolling Along With Kids

The most common question I get from readers is how to avoid Bali Belly on their family holidays to Bali. There is nothing worse than spending your holidays stuck in the bathroom and it’s even worse when little kids get it! Here are some of my personal tried and tested ways to avoid getting sick when you’re in Bali.

Saviours for when you're struck down by travel sickness

Seasoned traveller Absolutely Lucy shares her experiences on how she copes with the most common type of travel sickness.

If I could only choose one thing to pack in our travel first-aid kit it would be Travelan!

Make sure you’re packing the essentials when travelling to the Mexican Carribeans.